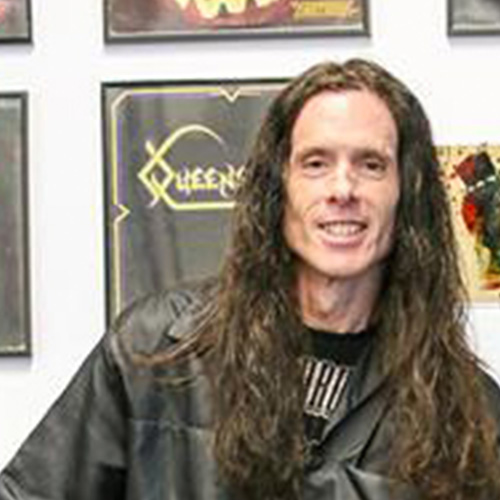 If Hard Rock Café and Supercuts met and had an edgy baby, their offspring might look something like “Get a Haircut”—a Rock N Roll themed Las Vegas barbershop that is both fit for the rock gods and fun for the family. In 2004, Jerry Jones, owner of Get a Haircut, opened the shop’s first location in his hometown of Lancaster, CA. Although he never planned on barbering, Jones did not hesitate at the opportunity to take over an existing barbershop. Just recently, Jones decided to stray from his hometown to open Get a Haircut’s second location in Las Vegas.

Upon opening his Lancaster location in 2004, Jones felt unsettled by the shop’s bare walls; he knew that he needed a theme to draw some excitement. Friends and customers suggested themes like sports, muscle cars, and aerospace, but Jones did not want a theme that felt insincere. As a longtime heavy metal aficionado, Jones slowly began to bring in heavy metal memorabilia and insignia; the more Jones brought in, the more intrigued people were.

The aesthetic of Jones’ Las Vegas shop mirrors that of his Lancaster location—album covers, records, posters, guitars, tour gear, photos and concert passes adorn the walls of what might otherwise look like your average barbershop. While waiting for a haircut, clients wander around the barbershop to ogle at the memorabilia. Jones began collecting heavy metal gear when he was a kid, so much of the décor comes from his personal collection. For example, Jones acquired Kiss jacket hanging on the wall at age 11. Similarly, he displays an original Motley Crue poster from his adolescence. In fact, Jones says that, in addition to the souvenirs in his Lancaster shop, he has a whole house full of more memorabilia.

Although Get a Haircut’s Vegas location is now a flourishing business, it was a long road for Jones to get things off the ground. It took him 3 years to iron out formalities like getting a Nevada barber’s license and finding a location. He credits much of the shop’s launch to Nevada Women’s Business Center, which he calls “a tremendous help” after his longtime girlfriend Traci contacted us in July 2016.

“I had tried other avenues [of funding] and was shot down everywhere else,” Jones explains, “You guys actually stepped in and helped me out, and I do believe that if it wasn’t for you guys and the help you gave me I wouldn’t be sitting here in my new barbershop. I mean that from the heart.”

In fact, Jones says that he was ready to pack up and move back to California, until he received help from the Nevada Women’s Business Center. Now that the shop is in business, it is bustling with success. On March 6th, the shop’s opening was officiated with a ribbon cutting. The ribbon itself was cut by Las Vegas’ mayor, Mayor Goodman, and was followed by a slew of musical performances. One highlight performance was by Carlos Cavazo who was the guitarist in Quiet Riot and, most recently, known for his band Ratt.

Having overcome a series hurdles to reach the penultimate celebration of a ribbon cutting, Jones’ story is one of dedication and perseverance. The payoff led him to the following words of wisdom for other entrepreneurs.

“Have patience and don’t give up,” Jones advises, “because I was actually ready to give up. I just got so frustrated with being turned down, [but] sooner or later it’s going to happen. If you have a dream stick with it, exhaust every option.”

Get a Haircut is located in downtown Las Vegas and about a 10-minute walk from Freemont Street. The family friendly barbershop is cash and walk-in only with affordable prices and a plethora of metal music mementos for endless enjoyment.

NBOF is the only organization offering comprehensive business training, technical assistance and loans specifically targeted to low-income women and minorities in Nevada

We provide entrepreneurial training, technical assistance and access to lending for new and expanding businesses throughout the state of Nevada.